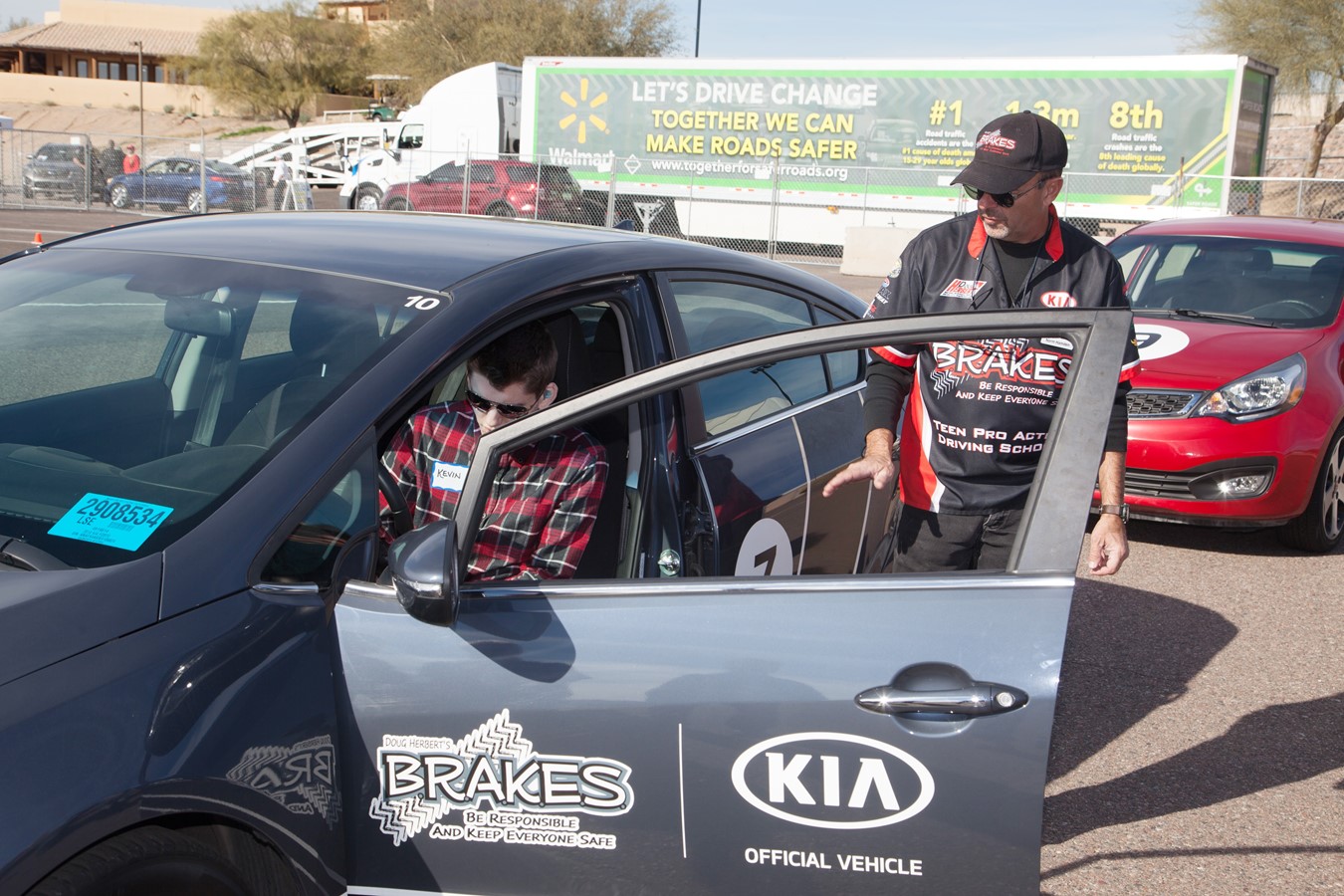 Fleet of Kia Vehicles Utilized to Teach Teens and Their Parents Responsible Driving Habits
IRVINE, Calif., Aug. 29, 2018 – Kia Motors America and B.R.A.K.E.S. (Be Responsible and Keep Everyone Safe) are expanding the number of free defensive driving classes offered in the Midwest.  Working with B.R.A.K.E.S., Kia aims to reduce the high rate of teens involved in motor vehicle crashes.  B.R.A.K.E.S. has provided training for more than 30,000 teens and their parents nationwide since the program was founded in 2008.  Research shows that teens who complete the B.R.A.K.E.S. program are 64 percent less likely to be in a crash in their first three years of driving1.
Midwest-based Kia Dealer Marketing Groups – with additional support from the Kansas and Missouri Departments of Transportation and other area businesses – have worked together to bring B.R.A.K.E.S. classes to Warrensburg, Missouri (Sept. 15 and Sept. 16); Topeka, Kansas (Sept. 22 and Sept. 23); Detroit (Sept. 29 and Sept. 30); Chicago (Oct. 6 and Oct. 7); Kansas City, Kansas (Oct.. 27 and Oct. 28); St. Louis (Nov. 3 and Nov. 4); Cincinnati (Nov. 10 and Nov. 11) and Cleveland (Nov. 17 and Nov 18).  To register for a class or see the upcoming schedule nationwide, visit https://putonthebrakes.org/shop.
“Kia is committed to safer driving and a key component is practical, hands-on advanced education to equip drivers with the knowledge and experience needed for dealing with real-life driving situations,” said Saad Chehab, vice president, Marketing Communications, Kia Motors America.  “We continually strive to advance vehicle safety through engineering, but safety features alone do not make for a safer driver. The B.R.A.K.E.S. program helps Kia advance those values by providing teens and their parents with tools to make smart decisions while on the road.”
Kia serves as the Official Vehicle and presenting sponsor of B.R.A.K.E.S.  Kia’s support helps B.R.A.K.E.S. offer free training for all attendees by offsetting costs through a financial donation and a 44-vehicle fleet, including Soul, Rio and Forte models.
“The support Kia and its dealers have provided for the B.R.A.K.E.S. program is invaluable,” said multi-time-Top-Fuel-drag-racing-champion-turned-road-safety-advocate Doug Herbert, who founded the charity after the tragic loss of his two teenage sons in a car crash.  “Car crashes are the number-one cause of death among teens, but working with Kia and our other supporters to continue to expand our schedule of schools, we’re confident that we can help prevent injuries, save lives and make our roads safer for everyone.”
Advanced Driver Training
B.R.A.K.E.S. provides participating teens and their parents with free hands-on, advanced driver training taught by professional instructors, including current and former members of law enforcement, professional racers and stunt drivers.  B.R.A.K.E.S. maintains a low three-to-one student-to-instructor ratio to maximize educational effectiveness.
Each school includes four hours of training, starting with a short, 45-minute classroom presentation followed by nearly three hours behind the wheel of new Kia vehicles. The program includes distracted driving awareness, panic braking, drop-wheel/off-road recovery, crash avoidance and car control/skid recovery – all among the biggest causes of crashes for new drivers.  Other educational elements often include ‘Big Rig’ safety, first responder vehicle extrication demonstration, and what to do in the event of a traffic stop.
About Kia Motors America
Headquartered in Irvine, California, Kia Motors America continues to top quality surveys and is recognized as one of the 100 Best Global Brands and 50 Best Global Green Brands by Interbrand.   Kia serves as the "Official Automotive Partner" of the NBA and LPGA and offers a complete range of vehicles sold through a network of nearly 800 dealers in the U.S., including cars and SUVs proudly built in West Point, Georgia.*
For media information, including photography, visit www.kiamedia.com.  To receive custom email notifications for press releases the moment they are published, subscribe at www.kiamedia.com/us/en/newsalert.
About B.R.A.K.E.S.Doug Herbert’s B.R.A.K.E.S. (Be Responsible and Keep Everyone Safe) is a GuideStar Platinum-rated 501(c)3 non-profit whose mission is to prevent injuries and save lives by training and educating teenage drivers and their parents about the importance of safe and responsible driving. B.R.A.K.E.S. was founded in 2008 after Top Fuel drag racer Doug Herbert lost his two young sons, Jon and James, in a tragic car crash. Today, more than 30,000 teens from 43 different states and five countries – and their parents – have graduated from the B.R.A.K.E.S.’ intensive half-day training course, which is free of charge and features hands-on skills exercises taught by professional instructors in a fleet of new vehicles donated by Kia Motors America.
Posted by Hyundai Dealer at 9:35 AM No comments:

Protect your factory finish of your Kia from the constant spray of water, mud, snow, rocks, and grit the tires throw at the wheel well areas-often leading to erosion of the paint and then rust and rot. Made of a high quality polymer these splash guards will serve you for years to come. Custom molded to match the lines of your Kia.

SAVE 15% ON KIA SPLASH GUARDS

Add coupon to Cart - Deal of the Month September 2018 - KiaAccessoryStore


Posted by Hyundai Dealer at 3:23 PM No comments:

IRVINE, Calif., September 19, 2018 – Stung with styling cues from the award-winning Stinger, the all-new 2019 Kia Forte is now arriving in showrooms and Kia Motors America is pulling out all the stops to introduce the world to its most sophisticated compact car ever. Professional race car driver, Collete Davis, stars in a high-flying marketing campaign showing off the Forte’s sporty design, advanced technology1 and Stinger-inspired driving dynamics in a way the compact class has never seen before.
The campaign includes three, 30-second spots: “Forte vs. Forte”, “Chicken” and “Smoke Machine”. The first spot – “Forte vs. Forte” – features a Forte drift car alongside the production model Forte driven by Davis, one of the most promising and dynamic drivers on the racing circuit today. As Collete speeds down the track she calmly points out the standard 8-inch touchscreen2 as she takes the production model Forte airborne and sails high above and over the drift car Forte. The spot ends when Davis nails the landing as the announcer says matter-of-factly, “It Doesn’t Have to Make Sense.”
“Kia continues to shock the industry and break the rules and the all-new 2019 Forte is no exception,” said Saad Chehab, vice president of marketing communications, Kia Motors America. “This adrenaline-filled campaign featuring a baby Stinger in a Red Bull suit screams ‘look at me’ even though some may question the idea of a Forte in racing livery, we are delivering an entirely new take on what many people see as simply a daily commuter car. And then again, some are still surprised to learn that Kia has been J.D. Power’s highest ranked non-luxury brand in initial quality for the past four years3, but to us and our loyal consumers all of it makes complete sense.”
Kia and Red Bull collaborated on the Forte drift car and are developing a three-part YouTube series hosted by Davis and featuring the Red Bull Driftbrothers, Joe and Elias Hountondji. The series documents the vehicle build from start to finish, including on-track testing. “Kia is fueled by youth and working with Red Bull is a mirror reflection of our youthful attitude and together we are going to showcase the new Forte in never-before-seen ways that are sure to capture attention,” continued Chehab.
Featuring a more sophisticated design and desirable features the 2019 Forte has transformed from a basic commuter into one of Kia’s best-selling vehicles. Thanks to a number of improvements Forte now offers drivers a higher level of comfort and Kia Drive Wise4 technologies that are aimed at making the journey – whether a short commute or long haul – a more rewarding and decidedly upscale experience. Sporting an overall bolder appearance, the newly designed compact sedan also boasts improved EPA-estimated combined MPG ratings5.
There’s also a long-form video – which was shot in one take and captured by seven strategically placed cameras – chronicling Davis’ jump from both in- and outside the Forte.
“As a professional race car driver, I love to drive all types of models and this spot, with the juxtaposition between daily driving and performance was just too fun to pass up,” said Davis. “When you have a passion for driving, even the most mundane errands, the longest commutes or the biggest traffic jams become easier and the all-new 2019 Forte is the vehicle that makes all the difference in those situations.”
About Kia Motors America
Headquartered in Irvine, California, Kia Motors America continues to top quality surveys and is recognized as one of the 100 Best Global Brands and 50 Best Global Green Brands by Interbrand.   Kia serves as the "Official Automotive Partner" of the NBA and LPGA and offers a complete range of vehicles sold through a network of nearly 800 dealers in the U.S., including cars and SUVs proudly built in West Point, Georgia.*
For media information, including photography, visit www.kiamedia.com.  To receive custom email notifications for press releases the moment they are published, subscribe at www.kiamedia.com/us/en/newsalert.
Posted by Hyundai Dealer at 2:47 PM No comments: 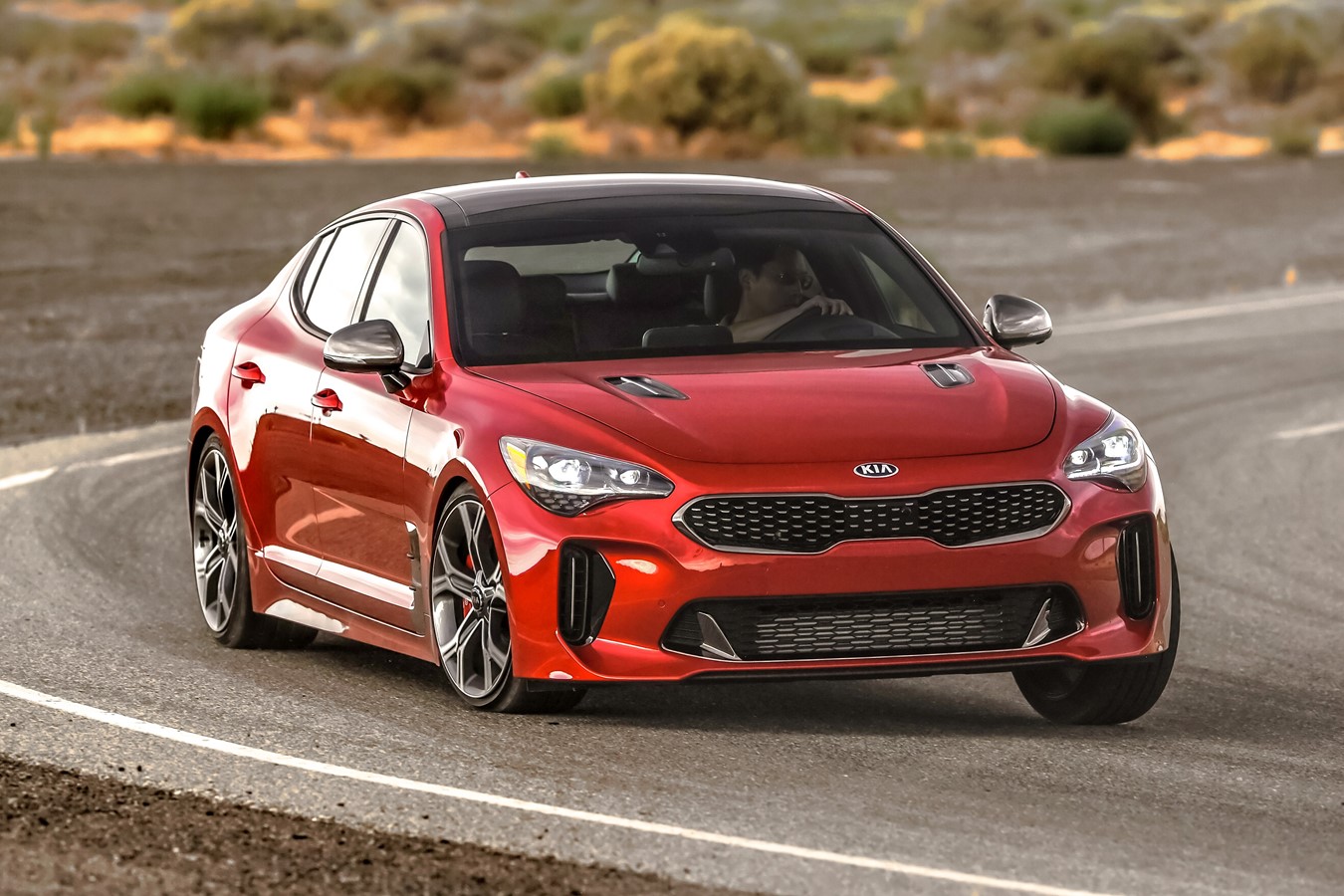 Kia’s Overall Score Increases Eight Points Since Last Year
IRVINE, Calif., Aug. 2, 2018 – Following the launch of the 2018 Rio and highly anticipated 2018 Stinger, Kia Motors America (KMA) has earned two more J.D. Power Automotive Performance, Execution and Layout (APEAL) awards for its stylish subcompact and its powerful fastback sports sedan.  The double win helped increase Kia’s overall score by eight points since last year, while also securing the brand’s spot among the top 10 non-premium nameplates. The announcement follows Kia Motors being named the highest ranked mass market brand in J.D. Power Initial Quality Study for the fourth consecutive year1, with the Rio also capturing a win in the small car segment.
“Whether it be a practical commuter car for people just looking to get from point A to B, or a sports sedan with up to 365-horsepower for enthusiasts, we design every Kia with the customer in mind,” said Orth Hedrick, vice president, product planning, KMA.  “Earning a J.D. Power APEAL award for both the Rio and Stinger demonstrates the level of dedication we put on delivering a superior combination of the desirable features and attributes today’s savvy car buyers want from their vehicles.”
Completely redesigned for the 2018 model year, the Rio outshined the competition in the small car segment, being one of the only contenders to score the highest marks in overall performance and design, comfort, features, and style. The highest performing vehicle in Kia’s history, Stinger bested its more expensive European counterparts in the compact premium car segment.
The J.D. Power APEAL study measures new-vehicle owners’ overall satisfaction with their vehicles in the first 90 days of ownership.  The results are divided into 10 categories and weighted accordingly: exterior, interior, storage, audio, seats, heating and ventilation, driving dynamics, powertrain, visibility, and fuel economy.
About Kia Motors America
Headquartered in Irvine, California, Kia Motors America continues to top quality surveys and is recognized as one of the 100 Best Global Brands and 50 Best Global Green Brands by Interbrand.   Kia serves as the "Official Automotive Partner" of the NBA and LPGA and offers a complete range of vehicles sold through a network of nearly 800 dealers in the U.S., including cars and SUVs proudly built in West Point, Georgia.*
For media information, including photography, visit www.kiamedia.com.  To receive custom email notifications for press releases the moment they are published, subscribe at www.kiamedia.com/us/en/newsalert.
* The Sorento and Optima GDI (EX, SX & Limited and certain LX Trims only) are assembled in the United States from U.S. and globally sourced parts.
Posted by Hyundai Dealer at 4:08 PM No comments: